The Bare it for Books Calendar, sold in support of PEN Canada, is chock full of naked Canadian authors who stare at me from my wall and keep track of all my social engagements. It only made sense to read a book by each author in the month they grace. Click here for more info.

“Because their motivations were clean, they were certain they deserved it more than those among them. They did not ask why they wanted to serve, be humane, or to give.”

When I was younger I wanted to be a doctor. I had a cute little scrubs outfit and my favourite book was Berenstain Bears go to the Doctor. Later, when I graduated with my BA in history and global studies, a desire to do good and no vocational skills, I reconsidered the idea. Yes my family laughed when I told them, reminding me I passed out watching my sister get a needle the previous year, but I diligently researched what I had to do to get into medical school – what courses, what exams, how much more education. Anyway, now I have a journalism diploma.

All of this to say that medicine has always piqued my interest, and with Vincent Lam starring in the Bare it for Books calendar this October it was the perfect excuse to bump this book to the top of my to-read pile. I felt like it would give me the inside scoop on doctorhood, which it sort of did, and now I’m really glad I gave up on that dream.

Somewhere between a novel and a short story collection, the book follows four doctors in med school and beyond, the individual chapters not necessarily linked or chronological. The doctors aren’t always the stars of the stories, just the common thread. Recounting their experiences as they diverge into various medical fields allows Lam to touch on all sorts of topics; dissecting cadavers, mental health, child birth gone wrong, emergency room antics, stopped hearts, cancer, international patient retrieval, SARS, as well as personal problems including alcoholism and infidelity. It was not particularly uplifting.

That said, I found it fascinating. You do get a sense you’re glimpsing the side of things you’re not supposed to see. The doctors aren’t presented as unassailable heroes, an important characterization for anyone who’s ever been frustrated by a medical professional, which is probably everyone. They’re not villains either. And they’re not immune – they die. There’s a lot of death in general.

Despite the heavy medical jargon (explained by a glossary), the stories focus on patients as much as doctors, making them relatable for anyone. The set up of the book, existing in a singular world inhabited by the four doctors but branching off anywhere from there, allows Lam to explore the perspective not only of his medical pros but patients under the knife, patients who return home, and families of people who didn’t make it.

Accurate and accessible medical writing is hard to find. Lam, as a physician, has an obvious edge when it comes to telling these stories which were not only absorbing but educational. I often declare to my boyfriend that I am qualified to diagnose something because I “almost went to medical school.” Now I can add, “and I read Bloodletting & Miraculous Cures.” 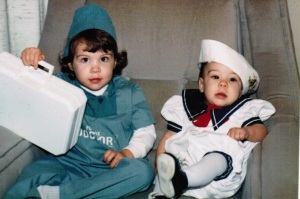 Me on the left. Apparently my sister was destined to be a sailor.

Posted in Side Project: BIFB