“This was the notorious Chilkoot Trail, the first and by far the toughest section of the best-known route to the gold fields.”

In 1897, thousands of men and women journeyed long and hard, immersing themselves in the Yukon wilderness on the hunt for gold. Earlier this month, I followed in their footsteps – at least, I trekked into the Yukon wilderness, though I wasn’t looking for gold and had access to a car and several grocery stores along the way.

I headed north with five other girls – 1 fellow Canadian and 4 Irish (though one of those Irish is a pseudo-Canadian now). We covered a lot of ground, on the road and on foot, from Whitehorse to Dawson to Tombstone, back to Dawson, on to Chicken, Alaska then Haines Junction and Haines, Alaska, ferrying to Skagway before hiking the Chilkoot trail.

It wasn’t the exact route that most of the gold seekers followed some century and a bit ago, but parts of it aligned. And presumably for that reason, multiple people recommended to me Gold Diggers by Charlotte Gray before I left. As much as I enjoyed the isolated outdoorsy-ness of the trip, I’m also a history girl at heart and knowing about the foundations of Dawson made me fall in love with the town a little bit more.

Before the gold rush, Dawson didn’t exist as a city, though there were First Nations peoples who lived in the area. Gray’s book details the population explosion, beginning in 1896 with the early rushers including prospector Bill Haskell, one of six individuals she focuses on. Beyond him was Jesuit priest Father Judge, savvy businesswoman Belinda Mulrooney, journalist Flora Shaw, writer Jack London and Mountie Sam Steele (that’s a police officer for any non-Canadians).

Dawson has certainly clung to its boisterous gold rush vibe and characters – the aforementioned Belinda has a “dining room” with delicious pie, Diamond Tooth Gertie’s casino features burlesque dancers and at the Downtown Hotel’s saloon you can partake in the Sourtoe cocktail, by downing a shot with a human toe floating inside (that’s a pun on sourdough, the nickname for miners who had lasted through a Klondike winter). 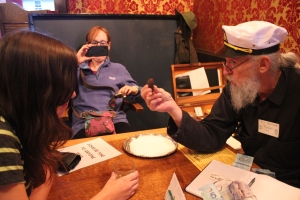 It wasn’t just our time in Dawson that had me swept up in the times of old. Even along the Chilkoot you couldn’t avoid the history if you tried (I did not try). Plaques mark important points along the journey, and there’s a small side trip to the ruins of Canyon City (basically a rusty boiler). At Sheep Camp, the night before we travelled up the pass ourselves, the Park Ranger gave a talk about both conditions we would face AND the conditions faced by those who came through at the end of the 19th century.

Turns out our conditions were kind of similar. At least, we had miserable cold rainy weather that had me wet and frozen to the bone, unable to see anything beyond the next orange post that marked the route up the boulders we scrambled over. I’m sure the view would have been lovely had we been able to see past the oppressive fog. But ultimately we gained a very sympathetic understanding of what the gold rushers went through because it was, at times, hell. And we only had to make the trek once; stampeders carried a literal ton of gear and it took them about 20 trips back and forth over each stretch of the trail to get all the goods! 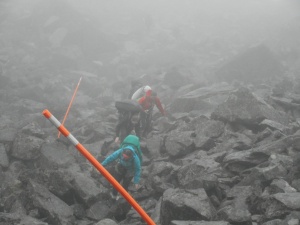 Photo credit of our misery goes to my lovely friend Odette

“Finally, Bill Haskell collapsed on the bleak, windswept summit of the Chilkoot Pass, 3,500 feet above sea level, with his last bundle. He was suffused with a sense of victory after such superhuman efforts.” While we with our 40lb packs did the whole trail in four days, Bill and his hefty goods took 23 just to get to the summit. Crazy. What was he thinking?

Probably something along the lines of what Yukon poet Robert Service wrote at the end of his “The Spell of the Yukon”:

It’s luring me on as of old;

Yet it isn’t the gold that I’m wanting

So much as just finding the gold.

It’s the forests where silence has lease;

It’s the beauty that thrills me with wonder,

It’s the stillness that fills me with peace.”