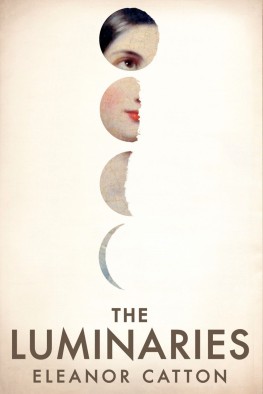 “He did not take pleasure, as some men did, in believing himself to have been betrayed.”

At 800 and some odd pages, this hulking hardcover seemed like a daunting read before even cracking the spine, and the story inside certainly lived up to that impression. The Luminaries is one of the most intricate novels I’ve ever taken in – an incredible feat of storytelling but at times almost overwhelming. With a cast of close to 20 characters impossibly entwined in the plot, a twisted timeline spanning decades and multiple mysteries set up in the opening sequence, it’s not exactly something to skim through on the beach. But it’s so satisfying.

The story begins as Walter Moody arrives in Hokitika to strike his fortune in the gold mines, as many men have done before him, and is accidentally swept up into a covert convention. Twelve diverse men, linked by the events of one evening, have gathered to share their knowledge surrounding that night. What follows is their piecemeal account to Moody of how hermit Crosbie Wells ended up dead, prostitute Anna Wetherell ended up unconscious in the street and rich man Emery Staines ended up missing.

This lengthy scene (300ish pages) is my favourite part of the book (which is not to say the story goes downhill afterwards). The range of characters, from a chaplain to a hotel owner to a Chinese opium addict, allows Catton to paint a vibrant picture of the entire town. Each tells the story from their limited perspective, creating a puzzle that the reader is forced to put together. There are so many parts to follow that I admittedly missed some key details and was happy for the recap offered by Moody at the end of it all.

Ultimately the men end up with more questions than answers, and the story unfolds over the following weeks, as alliances and promises are broken and mysteries multiply. The thing about mysteries is that I often find there’s only so many ways they can resolve themselves and it’s hard to invent one with a truly surprising ending. In Catton’s novel, there are so many storylines to unwind that even if you guess at one, you can’t predict them all (and to be honest one in particular still confuses me so if you read this book get in touch and let’s discuss).

One of the first things you’ll notice when reading the book is the running astrology theme (it’s called The Luminaries after all), with the characters being assigned a star sign and each chapter noting the interaction between them. Catton really plays into this, to the extent that, as Justine Jordan points out in The Guardian, “each of the novel’s 12 parts decreases in length over the course of the book to mimic the moon waning through its lunar cycle.” While that’s a pretty unique feature that shows Catton’s meticulous dedication, I will say overall the astrology theme did nothing for me, which probably means I didn’t fully appreciate the book. And I still loved it! So clearly it’s worth a read.