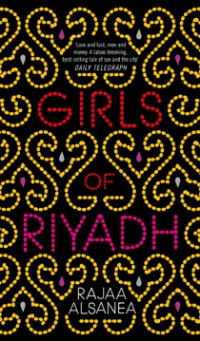 “She began reviewing in her mind every single thing that had happened that night at the Piano Bar the week before. Had she committed any of the transgressions that a young Saudi guy must not see coming from a daughter of his country? Had she said anything opinionated, bold, inappropriate?”

With Girls of Riyadh I did something I haven’t done in quite some time – judged a book by its cover. I found it on a library shelf and picked it up with no recommendation or clear idea of what it was about. But I figured from the title that it may fit this project’s requirements and I wasn’t disappointed.

Somewhere on the book jacket (or the internet?) GOR is described as the Sex and the City of Saudi Arabia – it focuses on four girls through university, love, marriage, and often heartbreak. The story unfolds through emails sent out to the masses after Friday prayers by an anonymous young woman.

Alsanea deliberately debunks some of the common perceptions of women in Saudi Arabia (or the Arab world in general). Granted, these are urban, upper class girls, and the book makes clear that things aren’t necessarily the same for women from smaller, rural areas. Nonetheless, our protagonists are educated, diverse and often quite independent – Sadeem goes off for a summer in London on her own before starting her own business with Gamrah, Michelle steals a bottle of champagne from her father to celebrate a friend’s wedding (despite the illegality of alcohol in Saudi Arabia), and Lamees is an orchestrator of illicit video exchanges (the titles of said videos include Braveheart and the Nutty Professor) as well as a future doctor.

But despite this, GOR supports the idea of Saudi Arabia as an unyieldingly strict society. While in London, Sadeem spends time face-to-face with Firas, but slips back into phone-only contact upon their return to Riyadh. Michelle’s rather liberal father bars her from becoming a TV presenter in Dubai because his family back in Riyadh may catch sight of her. Gamrah’s marriage is arranged by her family, and she sees her husband only once before their wedding day.

While it’s easy to condemn certain aspects of Saudi society, one of the cruelest scenarios actually unfolds in the US – Gamrah moves to Chicago with her new husband, only to find out he’s carrying on an affair with Kari, a woman in Indiana he fell in love with long before they wed. This is obviously a difficult circumstance for everyone and there’s no real great answer, but the way both Rashid and Kari treats Gamrah is pretty appalling. Lesson learned – no matter where you live, life can be hard, and people disappointing.

On the flip side, people can be pretty great too. Lamees succeeds as a doctor in Saudi, marries a lovely guy who is happy to have her finish school before she moves across the country to be with him, and basically lives happily ever after in a society often terribly challenging for women.

So while I judged this book by its cover…don’t judge books by covers in a figurative sense? There’s an analogy to be made here but I don’t think I’m quite getting it.