Alice Munro, Too Much Happiness (Canada) 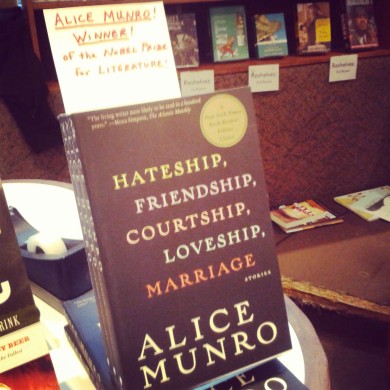 Harvard bookstore pushing Alice Munro, but not the book I read

I had planned to start this project somewhere further afield than my home country, but then Alice Munro went and won the Nobel Prize for literature and it seemed like an obvious jump off point. While I’ve read books by Canadian women, I’ve never delved into Munro before. Perhaps we covered a story or two in high school – I certainly hope so anyway. I mean, we read a Shakespeare play every year, and he’s an English dude that’s been dead for centuries. Meanwhile we have a living Nobel winner in our Canadian midst…get her on the curriculum! Of course, she hadn’t won the Nobel when I was in high school, but I digress.

Munro, for those who don’t know, writes short stories, so this gave me the additional benefit of checking out a style of writing that I don’t visit often enough. Of her more than a dozen collections I picked up Too Much Happiness, mainly because that’s what was available at my local library branch the afternoon her Nobel was announced.

The title is a bit misleading. The book starts and ends with stories of death, and most of those in the middle also include death (and generally not death as the result of too much happiness). What I’d heard of Munro before reading her myself was she wrote in simple prose about ordinary people. I guess I wasn’t quite prepared for the gloomy nature of these stories, though I can’t say whether that’s characteristic of all her work.

That being said, I was captivated by her tales, and even more so by the endings that sometimes caught me off guard. I would turn the page, expecting a story to continue only to find the title for the next one. I’m someone who likes all of my plotlines neatly tied up, so at first this was frustrating. Eventually though, I came to appreciate this style, particularly for short stories. You feel like you’re dipping into a brief moment in someone’s life – witnessing an event that will shape them without knowing exactly how. That’s not to say all the stories had this kind of abrupt conclusion; many of them actually span a lifetime, which is pretty impressive for a short story.

One other surprise came with the final story of the book. Munro’s known for setting stories in Southern Ontario, where she, like me, grew up, and while I haven’t encountered much of what her characters endured, the people and places seemed familiar to me. Then suddenly we’re in Genoa with Russians! Where’d that come from Alice! But I liked it.

I should say that while I haven’t read short stories very often in the past, I’ve recently been listening to quite a few via the Selected Shorts podcast which, if you’re a fan of storytelling at all, is delightful (and as I learned while linking to their page, is celebrating the stories of Alice Munro in January).

One response to “Alice Munro, Too Much Happiness (Canada)”