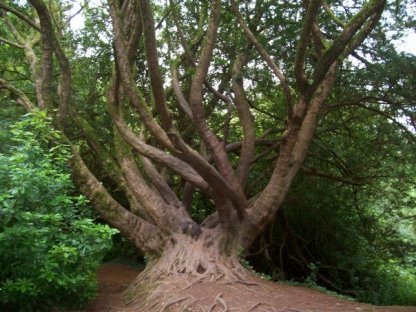 “The two people she loved most in the world would go to war and fight on opposite sides. Dear God, they might end by killing each other.”

One of my deep, not-so-dark secrets is that as a child I frequently daydreamed The Hollow Tree would be made into a movie and I could star as Phoebe Olcott, the quiet but determined girl who traipsed through woods and grief in the midst of the American Revolutionary War.

Speaking of which, I thought it was appropriate to read The Hollow Tree this week because Happy Fourth of July! But I didn’t consider that it’s mainly about a group of Loyalist families who end up in Canada. So…Happy Canada Day! Still works.

Timid Phoebe Olcott, also known as Mouse or Little Bird, lives in New Hampshire in 1775. War’s a-coming, and her father ships off to fight with Paul Revere and the Patriots, while her much-adored cousin Gideon sides with good King George. After her father dies, she moves in with Gideon’s family, until he too is killed – hanged as a spy from a tree in their town.

In the hollow tree at their former meeting place, Phoebe finds the secret spy message that Gideon had been entrusted with, and decides she must take up his mission, regardless of the fact that she doesn’t side with the Loyalists.

She doesn’t side with the Patriots either. Later in the book she frees a (probable) Patriot captive because she doesn’t believe he should be hanged. In the zero-sum game of war, Phoebe walks the line in the middle, and that’s why I like her. To be clear, there are reasons wars are fought and sometimes those reasons are good. And I, like Phoebe, am not making any sort of assessment on the legitimacy of fighting for independence in the 1700s.

But her point, after witnessing families get torn apart and run out of town by former friends and neighbours, and the cruelty between people that have been forced to depend on each other solely because they share the same side, is simple: “Loyal. That word that caused so much trouble…Wasn’t it more important to be loyal to what was right or to those people you knew and cared about?”

Phoebe shows incredible strength through her seemingly insurmountable struggles, from her cousin Anne blaming her for Gideon’s death to getting trapped in a tree with a bear – unlike the Pevensie gals, she has no magic horn to call in the boys for the rescue. She actually turns away Jem, despite having fallen in love with him, to continue her journey on her own.

While the story ultimately has a happy ending it doesn’t really romanticize war. In fact Phoebe makes a mental note at one point that Anne was wrong in calling it romantic. Phoebe’s perception of war is really one of futile cruelty.

Also, she just gets me. Or I get her. In any case this is my life: “It was easier, sometimes, she thought, to hold back tears of grief than those that came of unexpected kindness.”