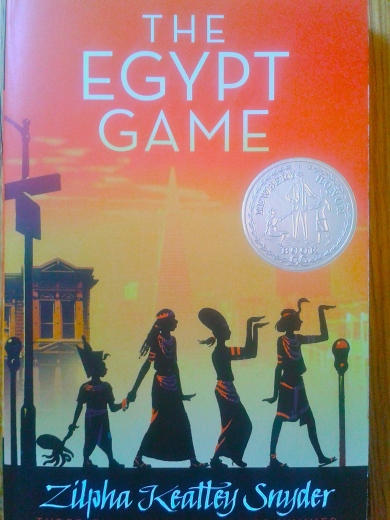 “…that was the way with all of the Egypt Game. Nobody ever planned it ahead, at least, not very far. Ideas began and grew and afterwards it was hard to remember just how.”

The Egypt Game seems like a part of my childhood rather than a story I read during it. I didn’t really remember the elements – the plot or the characters. Even while re-reading it nothing came flooding back, which surprised me given my former (and now renewed) attachment to the novel. You’d think something with that much pull over me as a kid would be buried somewhere in my brain.

But it was more a feeling than a story, the sense of creating a world; logically aware of its limitations but believing nonetheless that it was beyond the control of your imagination.

It’s strange that a story about children pretending can be so enthralling, and I wonder if my enjoyment stems more from sentiment than merit (though the Newbery Honor award it won probably says otherwise.) The plot revolves around a group of kids who turn an abandoned lot into ancient Egypt. Situations arise outside of the game that impedes their ability to play but the focus is always on returning to Egypt and what happens while there.

I was all for a good round of Monopoly as a kid, but this is really my type of game. Imaginary worlds that you don’t just get lost in for an afternoon before moving on, but that you build on day by day, advancing your own story. I had a few, and while I never put myself in ancient Egypt I’m willing to bet this book heavily influenced my own suburban adventures.

Even though I couldn’t recall details of the novel, I did essentially work out the mysteries before the book resolved them, either because I subconsciously remembered their conclusions or because I’ve read enough books in my life now that I can more easily grasp subtle foreshadowing. Regardless I couldn’t put the book down, mostly I think because I wanted to play with them. Last time I read it, I resolved the issue by inventing my own games and throwing myself into them just as fully and readily as April and Melanie.

I’d like to think my imagination hasn’t entirely abandoned me as I’ve aged. But I do think there’s a unique window in childhood where you’ve developed rational thinking without entirely giving into it, and are swept up in the possibility that just maybe the oracle is answering your questions. And I’m a little bit jealous of that.