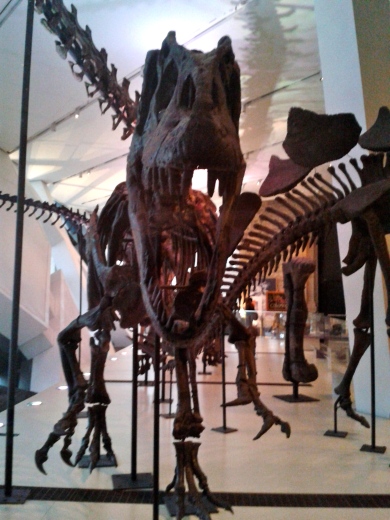 Definitely not a Brontosaurus (at the Royal Ontario Museum)

“If Daniel were anywhere today, I knew he’d be with his bones.”

All of my life, until last week, I thought I knew what a Brontosaurus was. Then a man on the radio dashed my entire understanding of the prehistoric era.

As I learned from from the radio expert (Brian Switek, who has written a whole book on the subject), and subsequent Wikipedia investigations, this guy discovered a dinosaur that he named Apatosaurus. Then the same guy discovered another dinosaur that was sort of the same but unique enough that he called it something new – Brontosaurus. But then a different guy decided that really they were the same genus even if maybe they were different species and so he renamed it back to Apatosaurus, and that was in 1903. So for 25 years I’ve been lied to about dinosaur names. Who’s even heard of an Apatosaurus?!

Pretty much no one except scientists I think.  Even the Land Before Time IMDB page calls Littlefoot a brontosaurus. So you can’t really blame Pam Conrad for making a brontosaurus the centrepiece of her novel. Besides the name means thunder lizard, which is delightful and rather apt.

The story takes place at the American Museum of Natural History in New York, where Julia Creath Summerwaite is touring with her grandkids Ellie and Steven. But the ACTUAL story, as told by Julie while they wander, is set on her Nebraska farm, where she lives with her parents and her much-adored brother Daniel in the late 1800s.

That is the era of dino discovery after all and multiple prospectors come through their land looking for bones. Daniel is keen to find his own dinosaur and sure enough he finds the biggest one of all. Unfortunately he doesn’t live to see it pieced together. That’s not really a spoiler because Julia admits as much at the beginning of the book, and I won’t tell you exactly how it all plays out. I will say that I must have gotten more emotional as I aged because I don’t remember crying as much the first time around. Also it seems I mostly read horribly sad books as a child.

The author doesn’t paint a very rosy picture of life on a Nebraska farm at the time, but there is something romantic about the notion of unearthing bones of an ancient beast. I was never super into paleontology – not like Daniel anyway, who “just loved bones. Rocks. Fossils. Anything old and mysterious.”

I do remember this book sparking a bit of dinosaur intrigue in me however, and after reading it once again (combined with a night out at the Royal Ontario Museum this week) I’ve got a bit of dinosaur fever – Jurassic Park anyone? So I can forgive Pam Conrad for perpetuating my misconceptions about Brontosauruses.

Incidentally, the days of dino discovery haven’t ended – a new species was found on the land of an Alberta rancher recently and they even named it after him, which is awesome as long as no one ever decides it’s too similar to another dinosaur to get its own name. 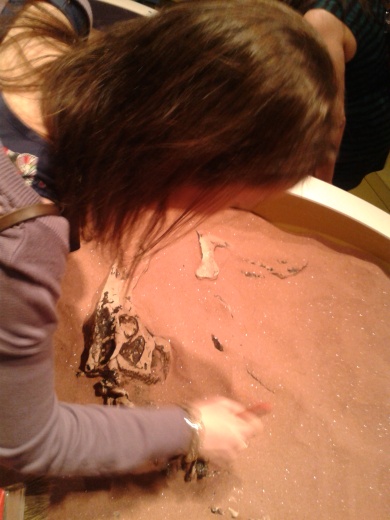